The 2016 Leongatha Golf Club Super League Presentation Night was held at the Clubhouse on a wet and windy Friday 24th June night. The teams-based event, generously sponsored by the Esplanade Hotel Inverloch ran for 7 regular season rounds plus semi finals and final and concluded last week.

The Cats team were this year’s premiers, defeating the previously undefeated Hawks team, 138 to 131 in the final. Members of the winning Cats team included, Doug Clemann, Wendy Parker, Colin Bear, Coral Gray, Neale Gillin, Ian Barlow, George Misson and Jim Arnott, and each player received a Club voucher. The runners up Hawks team consisted of Jon Smith, Toni West, Joe Lowell, Jan Brownlie, Keith Godridge, Peter Waters, Ian Watson and Paul Luck, and they also received Club vouchers. Ian Barlow received a voucher from The Esplanade Hotel as winner of the best player of the final win an excellent 38 points. It was Jim Arnott and Colin Bear’s second Premiership in the two years of the running of this event, congratulations to them! Jim tells me that he is available for hire next year!

Along with the team awards for the Premiers and runners-up, there was also an individual component for the best male and female players throughout the regular season. This year the Club named these awards in honour of our husband and wife dual life Members, Col and Nancy Sperling who were on hand to make the presentations. A Brownlow Medal-style voting system was used to award points for each round, with the Nancy Sperling women’s award going to the consistent Wendy Parker (Cats) who won from Bec Thomas and Marg Griffiths (see below). The Col Sperling Men’s award went to Men’s Captain Peter Waters who won on count back from last year’s winner John Eabry and Club President Chris Leaver (see below). 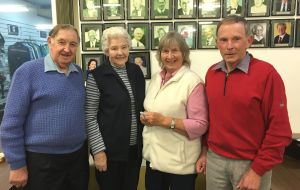 A good night was had by all, with special thanks going to our staff for running the night, to the Esplanade Hotel who sponsored the event this year, and to George Misson who oversaw the running of the event. We aim to run the event earlier next year – March to May – to take advantage of the better weather and course conditions.